“When environmental issues arise in real estate transactions
and you need a true professional, hands down,
Century is the BEST in their field.”
-Matthew Revitte, Realtor
Pro Realty Old Town

Modern science is continuously uncovering new suspected environmental hazards as well as new methods for evaluating them. Clients need consultants like Century that are on the lookout for, and contributing to, the development of superior methods that characterize exposure and conditions more accurately, faster, and less expensively than what was used previously. In addition to our constant attention to what others have developed, Century has made notable contributions in several areas, such as:

The U.S. Air Force contracted with a general/abatement contractor to perform lead abatement and re-construction of 155 houses at F.E. Warren Air Force Base in Cheyenne, WY. These were historic houses averaging 6,000 ft2 each, with about 25-30 rooms per house, so the task of abating lead paint, and cleaning the entire house was daunting at best. Moreover, it didn’t seem reasonable to follow the EPA minimum requirement of collecting four wipe samples for clearance purposes in such a large house, and in consultation with ourselves and the Air Force, it was decided that it would be preferable to have at least one sample per room to ensure the house was lead safe. This would be setting the project up for failure, though, considering that with four samples, most lead abatement projects take two or more attempts to pass the stringent 40 ug/ft2 clearance criterion. How may tries could it take to pass with 25 or more rooms that all simultaneously needed to pass? — Many! Worse yet, if even one sample failed, the contractor was forced to re-clean the entire 6,000 ft2 house, and the Air Force was unable to move occupants back in on time. A better approach was needed and Century developed just that.

Our approach, which we have not heard of being used elsewhere, was to screen samples with an on-site X-Ray Fluorescence detector prior to sending samples to the lab. First, we compared XRF data with lab data and determined that there was a strong correlation with a known bias in the data for which we could correct. Knowing this, we developed an approach that involved: 1) sampling each room; 2) screening each sample by XRF; 3) rooms that failed were re-cleaned until they appeared to pass, through repeated fast cleaning and testing; 4) the whole house was then re-tested one final time; 5) a subset of these final samples were randomly selected and submitted for confirmatory analysis. If we simply relied on lab analysis of four samples to inform our decision-making, the contractor would have had to re-clean the entire house rather than just the rooms that needed it; this saved the contractor thousands of dollars.Conversely, the approach made it cost effective to test all rooms, rather than relying on a minimalistic sampling of about 10% of the rooms, with no data on the remaining rooms. 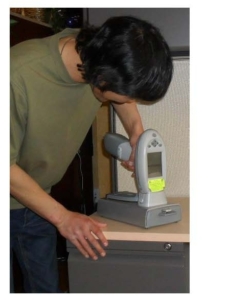 We are currently developing a method for using real-time dust measurement equipment to help predict completion of mold abatement. At times, on-time completion of mold abatement is critical. Yet, even after a visual inspection that suggests the remaining mold levels are normal, air sample analysis indicates elevated spore levels. Although usually weakly correlated with spore levels, we have developed algorithms from which dust counts can predict spore levels, increasing the rate of test passes from about 50% to over 90%. 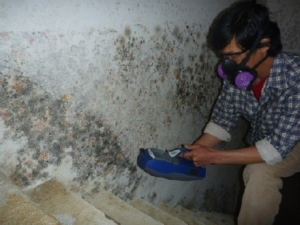 These are just two examples of how our insight into cutting edge technology was leveraged into saving building owners critical time and expense.